Now we have a couple weeks that have passed since Alexa Live: those few hours where Amazon just blew our minds and announced 31 new features. There are new features for designers, for businesses and, of course, for devs as well.

Now let’s look at a few features that I find most important and most exciting for developers and Alexa skill builders.

The first one is skill resumption. It’s what it sounds like. A user can resume a skill. But it’s more than that. A user could resume a skill already, right? So what’s new here?

What’s new is that a user doesn’t have to say “Alexa, launch (my skill)” to resume. Instead, the skill can sit in the background and either send notifications to a user or a user can ask for functionality without specifying the skill name.

Amazon gave the example of Uber; when you ask for a car on Uber, it takes a few minutes to find that car, and you can’t leave the skill open during that entire time. And so Uber can come back after a few minutes and say “hey, by the way, we found you a car, be on the lookout for a Ford Fiesta with this license plate”. All without you needing to ask for it.

Alternatively, a user can actually use other skills or Alexa features and then come back to the original skill without specifying the skill name.

If a user starts a yoga workout and then wants to play music or play a podcast, you can do that, then say “Alexa, what’s my next yoga move” and the skill will resume without you needing to ask Alexa to ask ’skill name’ for the next workout.

Users need to enable skill resumption permissions, which is a bit of a shame because that will add some friction to the user experience, but you understand that Amazon didn’t want this to be a runaway or risk surprising users. Imagine thinking you’re done with a skill, but the skill is right there in the background and pulls you back in.

Another thing that was announced was the controls framework.

The controls framework is a framework or a bit of code for the Alexa skills kit for node.js, and this helps developers build more complex skills and to better organize their skills as well.

The framework really manages the toughest parts of building a skill.

For example, managing what happens when a user exits the flow in the middle and then comes back to the flow later. Or managing knowing who has the initiative and if there’s a question that needs to be asked to move the user forward.

The controls framework also helps developers to organize their code a lot better.

Alexa conversations is a new way to build your skills.

Now, this isn’t something that Amazon announced at Alexa Live 2020, and in fact, I think they probably announced it about a year ago at ReMars, but they did open it up a little bit at Alexa Live.

It’s such a change because you’re moving away from code quite a bit and you’re using AI to build the skill and manage the conversation for you, instead.

You can integrate it with an existing skill and, depending on the kind of conversations you support, you could probably build a skill almost entirely or entirely with Alexa conversations.

So again, check it out. It’s something that I’ll be checking outas well and we’ll be talking about some more in the future

Something to keep in mind with Alexa conversations is that it’s only available in beta the US.

Multi value slots are a smaller feature, but welcomed.

In the past, let’s say you want to capture multiple t-shirt color choices from the user. For example:

“What color t-shirt are you looking for?”

To capture the above utterance and map it to your slots, you might have created multiple separate slots, like color_one, color_two, color_three.

Now, you can tell Amazon ‘Hey, this is a multi-value slot. You might get multiple values from this’ and Amazon will manage the rest.

Another new new piece of tooling is the vs code toolkit. I believe vs code has had some tooling for quite a while – I’m actually am a WebStorm guy myself – but I know that vs code is had at something there, but this makes it more powerful.

Some of the things you can do now include previewing APL inside the VS code, whereas before you had to go to the dashboard in the Alexa skills kit.

Additionally, you can do local testing, which is incredibly exciting.

It’s something that certainly a lot of us have been using Bespoken for and I’m sure we will continue to use Bespoken because it is quite powerful, but with with VS code now, you can do a little more testing on your Alexa skills.

You can use that local testing outside of VS code, it’s just something that you have to set up yourself.

I mentioned that you can preview APL which is great because there are new APL features as well.

There is APL audio. This is again something that Google has had for a bit of time, but it allows you to mix multiple audio tracks together in real time using APL.

If you want multiple audio files playing at once, like background music, sound effects and Alexa’s voice, you no longer have to string audio clips one after another or mix down 3 sounds together into one audio file.

This trims your audio editing time down immensely and offers new ways to be creative.

I don’t want to say that writing APL used to be a mess, but it was a bit of a struggle to write this nested Json and here using JSX, I think this is going to be a lot easier.

There’s also just so many more features as I mentioned. Here’s our top 7 new Alexa features for marketers and stay tuned for our top features for UX folks, too.

In the meantime, we hope you get to building some new interesting things with Alexa.

A tell tale sign that you need a conversational AI strategy (don’t make the same mistakes as you did with social) https://vux.world/wp-content/uploads/tell-tale-sign-website-hero.png 1800 1200 VUX World VUX World https://vux.world/wp-content/uploads/tell-tale-sign-website-hero.png July 22, 2020 July 31, 2020

Here’s a tell tale sign that it’s time to put together a proper conversational AI strategy for your company. 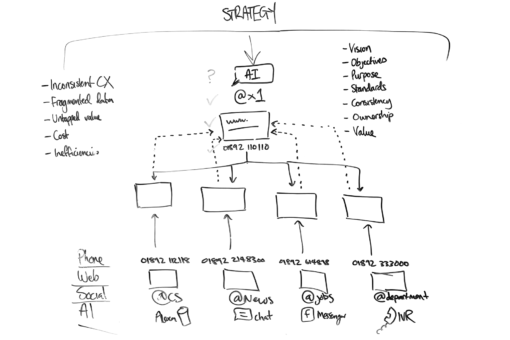 Voice and conversational AI is in danger of going down the same route as call centres, websites and social media did in the early days, leading to sunken costs, inefficient management, poor customer experience and ineffective results.

You’ll avoid this with a proper conversational AI strategy that’s woven into your core organisational strategy, but you first need to spot the signs that it’s needed.

Remember when companies used to have multiple Twitter accounts that catered for different customer needs? One account for customer service, another for news and updates, another for recruitment.

Fragmented, channel-specific implementations owned by individual teams shows that there’s a potential customer need and an awareness from parts of the business of an opportunity. But it comes at a cost to the customer and the business if it’s not managed centrally as part of a proper purposeful strategy.

History repeats itself with voice and conversational AI

The social media team might have a Facebook bot. The marketing team might be experimenting with Alexa and Google Assistant. The IT team might be working with Customer Services to implement an IVR bot and the Digital Team maybe working on a chat bot for the website.

There is nothing wrong with having multiple bots across multiple channels. In fact, this is inevitable when you implement a conversational AI strategy. The problem is when all of those bots are managed independently by a whole load of different teams, with different purposes, different cultures and different goals.

The drawbacks of a siloed voice and conversational AI strategy

Having multiple bots managed by multiple teams means that:

Depending on your culture, if you let things go too far down that route, it can be hard to implement a consistent strategy, even if you wanted to. People get comfortable. Defensive, even.

Start with a conversational AI strategy

This is why you should start from the beginning with a conversational AI strategy that has the following:

Once you have the foundations in place, you can then plan how you’ll explore, experiment, implement and grow your conversational AI capability across all customer touch points. You don’t have to conquer the world straight away, but you need to start in the right place, with purpose.

You may still have different bots in different channels that specialise in certain areas. They might not all do exactly the same thing, but they’ll have parity where needed and consistency in their appearance and experience.

You’ll save costs and effort, consolidate your learnings easily, as well as be able to move a heck of a lot quicker in response to what you do learn.

A siloed approach works in the extreme short term, but it’ll hurt you eventually. Get a strategy, please.

Two strategies to get your Alexa skill discovered

Alexa skill discoverability is a challenge that’s existed since the birth of the Echo as a skill developer or brand, how do you get people to use your Alexa skill? In this video, we dive into two strategies that, when used together, will help you find users. END_OF_DOCUMENT_TOKEN_TO_BE_REPLACED

What’s the best way to approach the development of a hashtag voicefirst experience for Alexa, Google Assistant and voice assistants?

The cool kids would have you use agile and the ‘proper’ project managers would be more comfortable using something called waterfall. But what if there’s another way?

Here I break down how agile development with a waterfall implementation might be the best way for you to a) learn and iterate during development and b) go live with a well rounded, higher quality experience.

Voice design can be a challenge for those who’ve never done it. Designing an Alexa skill is completely different to designing a website or app.

In this video, we run through a blueprint for a voice design workshop that you can use with your team or clients to find a use case, design, prototype and test a voice app. END_OF_DOCUMENT_TOKEN_TO_BE_REPLACED