Two strategies to get your Alexa skill discovered

Alexa skill discoverability is a challenge that’s existed since the birth of the Echo as a skill developer or brand, how do you get people to use your Alexa skill? In this video, we dive into two strategies that, when used together, will help you find users. 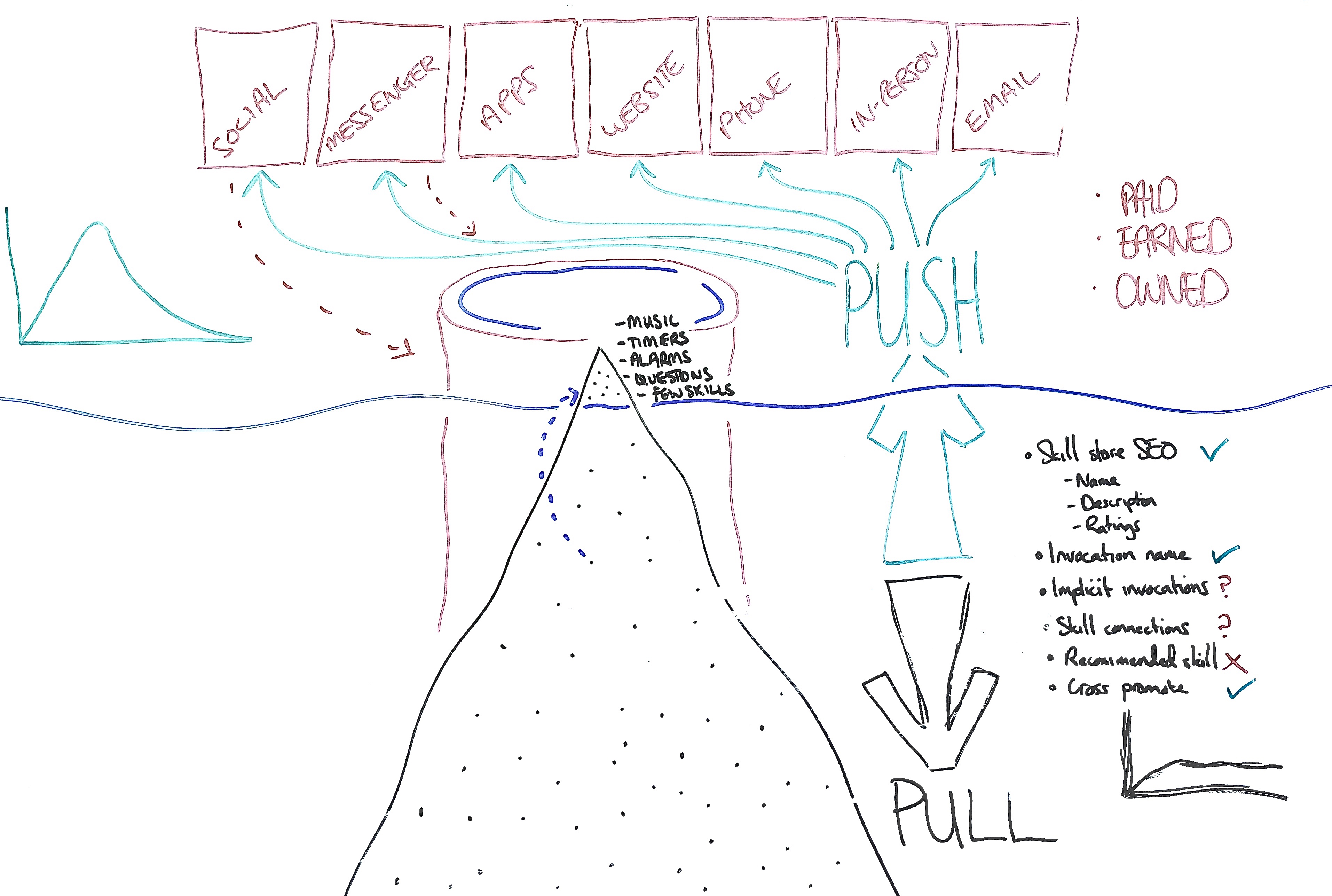 How do you get your Alexa skills to be discovered?

This is the age-old question that we’ve covered on the podcast plenty of times before and people still ask it time and time again because it’s still a problem that hasn’t been solved.

I want to run you through a couple of tactics that you can try. It’s not guaranteed to get results, but it’s some of the stuff that you need to be thinking about anyway and it will help you get your skills discovered.

Where we are now is that we have a huge amount of Alexa skills in the skill store I think it was a hundred thousand last year, God knows what it is now, but most people use the first party stuff.

Most people are playing music, setting timers and alarms, asking general questions. Some people don’t even know that skills exist.

And those that do know that skills exist don’t tend to use that many and they’re not always used that frequently.

It’s kind of the same as apps, and so really you’ve got a whole lot of competition because there’s over a hundred thousand different skills and every one of them wants to be one of those ones that gets used regularly.

So the question is, how do you get yourself from down here under the surface up into here to be the thing that people use time and time again?

This is the kind of stuff that you will do regardless of whether you have a skill or if you have a website or an app or anything, is that you need a mixture of approaches.

You can post messages through social, you can schedule social media feeds constantly. You can push stuff through Messenger if you have a messenger bot or if you have you know,
an SMS service, through your app, through your website on product pages:

“Did you know you can order this on Alexa?”

Over the phone when people do get through to somebody and speak to somebody you can have those agents evangelizing for the Alexa skill. This is how organizations get their app be used and get people onto their website is that if you’re ringing someone you speak to someone, having that frontline member of staff promote alternative ways to self service is always a good idea.

In person, same kind of thing and also in person you can think about in store when people are install how can you promote the fact that they can do this themselves through Alexa? That could be on-pack it could be staff, it could be banners and signs Etc.

And then you’ve got email. If you have an email distribution list, you can drip feed people with that through there.

Now, that’s all well and good if you are a brand that has these owned channels. What if you’re a hobbyist that doesn’t have these channels? Well, then you need to be starting to look at earned media.

How can you identify across these channels current authority websites, apps, you know, that can help you reach that audience? And can you approach those outlets, build a relationship, show them that you have a product that is worth them speaking about and maybe, maybe they’ll feature you or maybe you’ll get put into a newsletter. Maybe you’ll get put on to their website. You’ll get a review written something like that.

Brands do this as well and you should do this. That’s where most of the PR kind of noise comes from is through these earned channels, which is ‘here’s something interesting or fancy or worth speaking about will you write a piece about it and help us promote this skill?’

And the last one is paid. For hobbyists, you might not have the budget. For some of the bigger brands, you might do. You might use paid channels to try and get traffic into your skill.

All of that stuff is all well and good, but it’s probably going to have a temporary effect unless you unless you can sustain it and long as you’re doing these push-based things you might notice a spike, but as soon as you let your foot off the gas, you might see that diminishing.

The pull based mechanism is whereby you just have something of value that people need and want and they’ll go searching for it. And your job is to be there when they do.

You’ve got a few options really.

What’s the invocation name? This is probably the most important decision that you’ll make when you create an Alexa skill is to give it an invocation name that’s natural, easy to remember and from a discoverability perspective, something that people might actually be asking for anyway.

That’s the hardest part is to find a real use case that people are already asking for and to build the skill that meets that need.

Above and beyond that you’ve got implicit invocations, which is where your skill is doing something that someone is asking for but rather than invoke it directly, they might invoke it in an implicit way, which might be that if you’re Uber and you’ll have a taxi service, and someone says “book me a taxi”, Alexa can just put them into the Uber skill.

This is in its infancy and it’s got a red question mark next to it because it’s not guaranteed.

Skill connections is another opportunity. If you have the kind of skill that can be the glue that threads a user experience together.

So for example, if there’s a lot of restaurants skills out there that allow people to book tables, then you could create a skill connection skill that offers people that taxi and therefore you can then start approaching all of these other skills to say, ‘by the way, we have skill connections available, if you want to offer your users an additional service
of being able to book a taxi after their reservation’, we can do that for you.

This is a little bit like the old-school kind of link building that you used to have to do online. You had to just approach websites and say ‘look we’ve got this really good piece of content. I think your users would benefit from it. Would you mind link into us from your site?’ It’s kind of the equivalent.

Another thing is that you become a recommended skill. So again that’s got a red cross next to it because you really do not have any control over that. Amazon determines which skills to recommend.

So that also then raises the importance of the name, the description and the categorization of your skill because if you can find the popular skills and games and you can categorize your skill similarly, you might end up becoming one of those recommended skills.

And then you can also cross promote if you have a skill that’s doing well. You can cross promote your other skills within that skill, which is kind of what Matchbox do, I think that’s what Labworks do as well.

With that one, you need to have a stable of skills already, you need to have people using it already and then you benefit from the traffic that you’ve already got. So that might not necessarily apply to people who are just getting started.

Unfortunately, with all of this, there isn’t a magic bullet. It requires a lot of time and a lot of effort and maintaining that outbound pushing up to raise awareness as well as making sure you’re doing all of your optimization properly and you’re constantly testing and refining this pull based approach.

There is no magic bullet and if anyone else has any tips or advice that you can share with people stick it in the comments below.

Until next time. See you later.

The future is multi modal