The REAL reasons why voice will be HUGE for brands

Let’s take a close look at the real reasons why voice will be huge for brands.

There are plenty of statistical reasons why voice assistants and voice-first technology will be huge for your brand, but those aren’t really reasons. Those numbers don’t tell the story of the cause. They just predict the effect of increased user adoption and usage.

But why is user adoption of smart speakers and voice-first devices rising? Why are more people speaking to their phones, speakers and household appliances? And what impact will that have on your brand?

Through understanding why voice is growing, you’ll understand why it’s inevitable that voice will be huge for your brand.

So that’s what we’re going to do.

But first, let’s get those stats out of the way

The stats everyone likes to quote are: 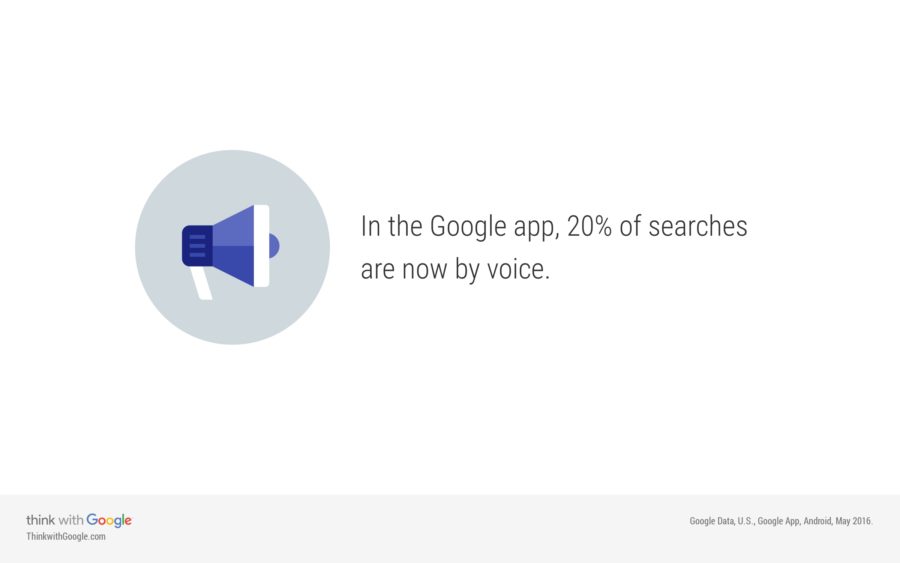 And, apparently, there were over 30 million smart speakers sold in 2017 and smart speaker adoption is outpacing smartphone adoption.

So, that’s the numbers, now so what?

Those numbers should certainly grab your attention, but they don’t explain what’s actually going on here.

What’s actually going on here is that we’re heading through a time that will fundamentally shift the way we interact with technology.

Voice-first devices will fundamentally shift the way we interact with technology.

That means retraining our expectations. It means creating a whole new set of mental models. It means completely new use cases.

With all of that comes new behaviour. New experiences. New psychology.

Within that are the reasons why voice will be huge. It’s the reasons you can’t quite quantify. The human, behavioural, psychological and emotional reasons.

The first of those reasons why voice will be huge for your brand is because of an absence of platform friction on voice-first devices.

What do I mean by platform friction?

With any other form of UX, you can only remove so much friction before you reach the native friction that’s built into the medium you’re designing for. Phones, laptops, desktops, tablets, apps, web browsers; all have inherent friction that’s beyond the control of a designer.

Take a website for example. You might have the best, most user friendly, friction-free website on the planet. Yet, to get there, your user still has to:

That’s friction that you can do jack shit about. It’s built into the mobile browsing experience and you don’t have an ounce of control or input into it.

With voice, the platform itself is friction-free. The platform has already removed all those barriers and blocakges and opportunities for failure for you (apart from having to download Skills on Alexa).

Mostly, you can just focus on executing a use case.

Voice lends itself to totally and utterly friction-free experiences unlike any other platform that’s ever came before it.

And when you remove friction, you increase speed.

Voice platforms are far quicker than any other technology platform available right now.

With each evolutionary step, we get quicker and our expectations get higher.

Collar a colleague or friend, put your phones flat on the table and set a timer.

Then, have someone shout a location, any location, and race your friend to see who can find directions first.

Short of the location being something totally obscure, I bet the person using only their voice will win 99% of the time.

And because it’s quicker, it saves people time.

Gary Vee often claims that companies and technologies that succeed are often the ones that save people time.

Before eBay, you had to gather up a load of belongings, pack your car, drive to a field, unpack your car and stand there at a car boot sale waiting for people to come up to you and negotiate a sale for your unwanted stuff.

The planning involved in running a car boot sale stall is unreal.

Now, with eBay, you can take a photo and have it available to the world to bid on within 5 minutes.

That list is the most basic of basic tasks that most of us do every day. Some of them we’ll do tens of times.

Just imagine if you halved the time it takes to do each of those tasks, then spread that time across a day, week, month, year. You’d end up having an extra hour or so a day. And that’s conservative.

Imagine if, wherever you are right now, you could freeze the clock and have a completely free hour. An hour to do whatever you want. Then, after the hour, you’ll resume from where you are now.

Now, in reality, you aren’t going to have a full hour at the end of your day to spend as you wish. You’ll just be able to act on things and do things quicker, which leads to…

Brain Romelle pointed out, on the Rene Ritchie Vector podcast, that technology is a tool that allows humans to be more productive.

In the same way we created tools to help us chop wood to build fires, we have tools that help us accomplish tasks today. And that’s what voice does.

With voice, as a tool, with its speed and friction-free nativity, it means that we can get more done in shorter spaces of time, making us more productive.

Those are basic, crude examples, but imagine scaling that into the workplace. Imagine being able to book a meeting room, send an email or perform any other routine, time-consuming task, all while doing something else or at less than half the time it takes you currently.

Smartphones have been slowly desocialising us for years. Some phone use is borderline rude.

Looking down at a screen while someone is talking. Googling something at dinner. It all breaks up the conversation.

Voice-first devices and experiences let people lift their head up again. It lets us keep eye contact. It lets us remain in the flow of the interaction and not have to break our concentration or conversation.

We met some friends for dinner. They’ve just had a baby and had to feed her before our meal arrived. Instead of having to pick out his phone and withdraw from the group while he set a timer to warm the milk bottle, my friend took out his phone, asked Google to set the timer and placed his phone on the table.

He was able to sort the timer and milk-warming situation without having to break concentration or even lose eye contact.

Seeing someone else do that as if it was nothing was a revelation. Voice-first experiences let us carry on doing what humans are hard-wired to do… Socialise.

Plus, 50% of the time, Amazon Echo’s are used by more than one person. It’s inherently more social.

Being able to continue being engaged with other people while still searching for information or performing tasks is a huge reason why the usage of voice first platforms will continue to rise. And another reason why voice will be huge for your brand.

The final thing that voice-first platforms have that other technologies don’t is the potential for far more users to use it. The potential reach is gargantuan.

The internet is great, but the devices that we use to access it are shrowded in inequality. Smartphones, laptops, keyboards and mice all have accessibility problems that prevent millions of people from using them.

Now, Apple does have some great accessibility features and I’m sure other platforms do as well, but compared to the most natural interface ever, it’s nothing.

Voice is indiscriminate. Yes, you might have problems using a purely audio based platform if you’re def, but aside from that, just about every person on the planet can use a voice platform.

Plus, with the addition of screens on devices like the Echo Show and cameras that are learning sign language on platforms like Mycroft, the potential reach for this tech is literally every body with an internet connection.

All of the above are reasons why voice will take-off and be adopted by more and more people. More of our time and attention will be spent on voice interactions.

And wherever people’s attention is, that’s where brands need to be.

If you’re even remotely interested in new technology, if you have an ounce of care for user behaviour or if you’re looking to get an early foot in the door, then I’d implore you to have a dabble in getting to grips with the voice ecosystem.

More from VUX World
LATEST ARTICLES AND PODCASTS
Voice design at Comcast, with Chuong Nguyen and Carolyn Reed
Why digital transformation has always been about voice, with Frank Schneider, CEO, Speakeasy AI
Google’s Assistant strategy and what it means for your brand
Latest articles and podcasts