What’s the difference between a voice assistant and a voice user interface (VUI)?

Voice assistants and voice user interfaces (VUIs) are used interchangeably under the banner of ‘voice’. But what’s the difference between the two?

What is a voice assistant?

“Engaging with intelligent technology using voice as the method of input (e.g. a digital assistant like Google Assistant.” 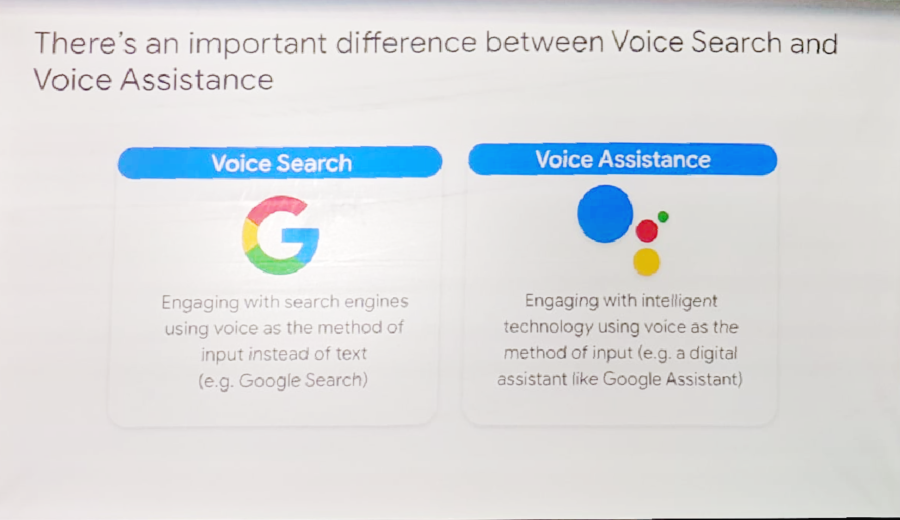 The key word there is ‘aid’. A voice assistant aids and assists users in whatever it is they need assistance with, using speech as the primary method of receiving requests and responding.

That could be assisting you in accessing your calendar schedule, assisting you in finding a podcast, helping you get the news and even navigating through the apps on your phone, as we witnessed with the Google Assistant announcements at Google I/O ’19.

For example, with Alexa, you can access you calendar, send SMS messages, book train tickets, order pizza and check your bank balance. Lots of information from lots of sources, all pulled through one place and accessed via voice.

Google Assistant, Alexa, Siri, Houndify, Mycroft, these are all examples of voice assistants.

What is a voice user interface?

Amazon defines a voice user interface (VUI) as something that:

“… allows people to use voice input to control computers and devices.”

A voice interface is a front-end. A way of interacting with software with your voice, instead of tapping or typing.

For example, Spotify has just launched voice enabled ads in the US:


At the end of the ad, listeners can say ‘play now’ to play the advertised playlist. Using your voice to interact with the software instead of tapping. It’s not an ‘assistant’, it’s an ‘interface’.

Hopefully that’ll help clear things up next time you read or talk about voice.

More from VUX World
LATEST ARTICLES AND PODCASTS
The 2 things holding AI assistants back (and it’s not tech)
7 steps to stop bots saying ‘can you repeat that?’
Voice with X-Ray vision?
Latest articles and podcasts

Google Assistant passes 1m Actions! Where the F did that come from?