The next generation of synthetic human-like voices

Why have film-makers been slow to adopt synthetic voice? They could generate voices quickly and more cheaply. They could pick and choose from a huge variety of different voices and accents. 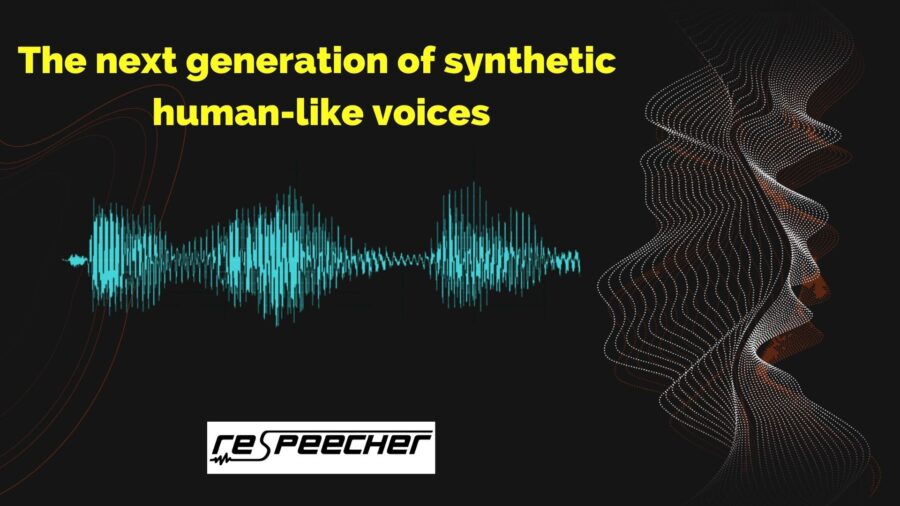 Let’s consider film production from the perspective of voice; first the dialogue is written, then it’s performed by actors, and then film editors use those performances as the guide for their edit. The actor’s voices are used to guide everybody who creates the final film.

It makes no sense to shoe-horn text-to-speech (TTS) into that workflow – the production would fall apart because they wouldn’t have that guide. Who would generate it, make creative choices about performance and tweak it to perfection? Films are made fast – nobody has time to endlessly tweak things.

And why bother when you can work with actors who provide nuanced performances? Actors become the characters they portray – that’s the glue that holds films together.

The importance of voice actors

Think of this example from The Empire Strikes Back. Imagine if Darth Vader had said “I am your father”, and Luke had replied “no”, as if someone had asked whether he wants olives on his pizza? The moment would have felt dumb. Luke’s feelings would have seemed unconvincing. The massive twist in the story would have been unimpressive. That’s why he replies “no? NO!” with a little crescendo, a strained voice and tears in his eyes.

If the film editor had to work with an unemotional TTS performance of Luke they wouldn’t be able to edit a powerful scene and the film wouldn’t have its climax. The raw materials would have been crappy.

Now film-makers are starting to adopt synthetic voice. Why? One company seems to have solved the biggest issue that was holding other providers back. They’re called Respeecher, they’ve and have been used for high-end productions like The Mandalorian. VUX World spoke with their CEO Alex Serdiuk.

Let’s consider why they’ve succeeded where many synthetic voice providers have failed to start.

First we need to look at SSML (Speech Synthesis Markup Language). TTS is synonymous with SSML, and let’s face it – SSML has issues.

The concept makes sense at least. You choose a synthesized voice and then use SSML to tweak it. For example, you can improve the pronunciation of your brandname, or you can emphasize certain words so that users are sure what their options are when they speak with a voice assistant.

Why’s SSML and TTS a problem?

Firstly, nobody thinks that way when they speak. We know what we mean when we talk and we use everything available to express it – the words and the way we say them, facial expressions and body language. We don’t imagine the words and then dress them up with prosody while we say them. We have speech patterns and alter them depending on context – for example the way we speak to a child or pet are fundamentally different from the way we would speak to a courtroom. One is tender and personal whereas the other is objective and measured.

Secondly, creating a design concept for SSML is hard. You need to know exactly what you want before you start adding markups to everything. You need to think through the whole performance – word by word – and then consider if it should be more emphasis here or lower pitch there or many other possibilities. SSML is an abstract language – how can you tell what dramatic effect pitch, loudness or speaking rate will have unless you’ve studied vocal performance? Very few people using SSML have that knowledge. Crafting a clear sounding voice assistant is possible, but creating a dramatic performance for a film is damn-near impossible.

Thirdly, it doesn’t always work. You can spend hours tweaking SSML and only make meagre improvements because the system might not allow for what you want to achieve. The only way to test what you’ve done is to listen. You can get stuck in the loop of adjust – listen – adjust – listen for hours until you’ve lost all perspective. This isn’t efficient.

Resepeecher’s STS (speech to speech) is different. You don’t write text and then apply SSML. You start with a natural vocal performance – for example shouting a bellowed “nooooo!” into your microphone, and then your voice could be converted into Luke Skywalker’s (this is just an example – they don’t allow anyone to use actor Mark Hamill’s voice for ethical reasons). It would sound like Luke Skywalker is saying your words, the way you said them. All the emotion that was present when you spoke is still apparent even when it’s said with a different voice. The right emotion can be expressed at just the right moment to tell the story.

Sound teams are used to working with voice actors so Respeecher’s tech fits into a sound team’s workflow with very little friction and plenty of benefits. This is why it works. It seems so easy and obvious but it’s a massive difference from the normal TTS workflow – to write words and then mark them up with SSML. Respeecher matches the way we use our voices to express ourselves, so we can focus on performance rather than tweaking with an abstract coding language. Revolutionary.

This workflow isn’t specific to Hollywood – if you find yourself getting bogged down with SSML then perhaps it’s worth considering Respeecher?

Here’s a video of their software in action.

Listen to Alex Serdiuk speak all about the speech to speech technology of Respeecher on the VUX World podcast. Listen on YouTube, Apple podcasts, Spotify or wherever you get your podcasts.

A few words about Ukraine

Respeecher is a Ukrainian company, and much of their team still live there, perilously surviving under an unprovoked attack from the Russian army. Respeecher are doing great work within these horrific circumstances, and are even using their technology to boost morale at home.

Conversation design: towards a single source of truth