Why Aflorithmic is the WordPress of audio production

Sound designers and music composers make thousands of tiny choices in everything they do. That’s because there’s always so much to consider in their work – how does this sound relate to that visual, how can I make the voiceover heard when the selected music track is so attention-grabbing, is voice A or voice B more suited to the project brief? Those are just three examples from vast possibilities.

That’s without mentioning what you have to learn about studio equipment such as microphones, compressors, equalisers, DAWs (digital audio workstations – the software used to design and edit sounds and produce the final ‘mixed and mastered’ audio file) and then the various audio styles that crop up again and again in production meetings – Hollywood sound, documentary-style, different voiceover treatments for a tv commercial or radio-drama – it just goes on and on.

So, let’s agree that audio production is complicated! Nowadays more content is being created than ever before, and in some cases there isn’t the budget for a sound team. Bad sound reflects extremely poorly on a brand  though – nobody wants to release content with amateur-quality sound.

That’s where Aflorithmic see their opportunity. Timo Kunz is Aflorithmic’s CEO and he chatted about it with Kane Simms for his VUX World interview. 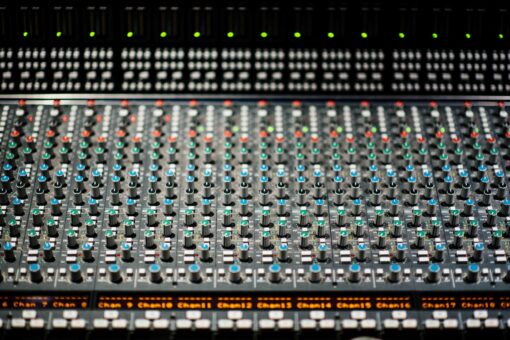 Would you know which button to press first?

The WordPress of audio production

Timo uses WordPress as an example. Whereas in the past you would need to hire a developer and designer to make your website, now you can just get a WordPress template and start filling the content straight away. Working solo on your laptop, you can make something that looks great rapidly. It used to take a long time!

That’s what Aflorithmic’s automated audio production does. It’s not for enabling creatives to build exciting new things, it’s for those who need to create content that sounds good quickly. In other words it doesn’t break the sonic mould – it’s for using the mould as a repeatable template. They’ve trained their alogrithms to create voices, music and sound design – together known as a soundtrack – then it gets mastered to specification.

As with all AI, the result is a prediction of what people want. It learns from successful productions and replicates what worked.

There is a huge need for this – just look at the explosion of video across TikTok, YouTube and other video sites. Another use is brands who need lots of explainer videos and testimonials, often they need them localised to various cultures, and they rarely have the time or budget for a full sound production.

Sound production has always relied on templates – whether it was a music producer aiming to copy Ringo Starr’s drum sound, or a dance music producer using an off-the-shelf synthesizer sound (known as a ‘preset’) to make their new track.

Here’s the challenge – before the proliferation of AI in audio production, there was always a human in the mix. A sound engineer may know their equipment, they may know how to produce different styles of audio, but they get hired for their ears and their ability to interpret a brief.

It all comes back to those thousands of tiny choices. The sound engineer will listen over and over again to the same piece of audio and tweak it until it sounds the best that it can sound. And by ‘best’ we’re talking about something subjective – it’s about judging the needs  – whether the voice should be louder than the UI sound effect at a particular moment in the explainer video, where the music should reach it’s climax, whether the sounds used should be realistic or cartoonish or any other possibility.

They may have presets, but they will listen to them and adjust them to make improvements – the preset is just the starting point. 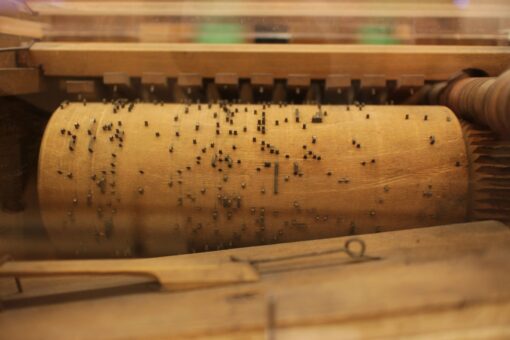 Brands will always rely on expert audio teams for their tv commercials, filmmakers will always rely on sound teams for their cinematic productions, and the next Grand Theft Auto videogame is unlikely to have an AI generated soundtrack. In those cases the stakes are too high – those are creative arts that need a soundtrack that dazzles. There’s just too much competition to not have inventive sound – people expect to be impressed and surprised.

On the other hand there’s tons of media being produced where they need it to sound great, but they’re not trying to rewrite the audio rulebook. That’s your vlogs, explainer videos, tutorials, conferences, podcasts and much more – they’re very likely to use an AI generated soundtrack if it sounds good and it’s painless to create.

If that’s you then maybe you should check out Aflorithmic! They’re doing an incredible job, and they’re addressing a genuine need. Everyday masses of content is being produced that would benefit from an improved soundtrack.

More from VUX World
LATEST ARTICLES AND PODCASTS
The risks of Large Language Models (such as ChatGPT)
Conversational AI at Expedia with Molly Dickinson
Digital humans for healthcare with Paulina Lewandowska, Roche
Latest articles and podcasts

How to connect any digital assistant to any call centre

AI at Marks and Spencer: 2 current use cases