With the latest developments in Alexa functionality announced at Alexa Live 2020, Amazon has shown a glimpse into its advancing Alexa strategy, and how it’s trying to make up for a long-standing weakness. Here’s the what, why and how.

Before we look at where it’s been taken, we should set some context on where Amazon’s Alexa strategy has been and why.

For years, Amazon’s Alexa strategy has been ‘Alexa Everywhere’, which has aimed to put Alexa into everything imaginable. From smart speakers and headphones, to microwaves, rings, clocks, cars and anything else you can think of.

This is Amazon’s play to make Alexa the go-to voice assistant.

Why Alexa needs to dominate the voice assistant market

One of the main reasons Amazon needs Alexa to be the dominant voice assistant is that the dominant becomes the default.

Facebook became the dominant social network. Now it’s the default. (It’s not without its challengers: TikTok, SnapChat, WeChat etc, but Instagram, What’sApp and Facebook combined are the default social and messaging tools for entire generations of people across the world)

The reason #Amazon needs #Alexa to be the dominant #voiceassistant is that the dominant becomes the default. Click To Tweet

Netflix, Android, Amazon, Windows, Visa, the list goes on. Become dominant enough to form habitual behaviours, then turn those behaviours into internalised triggers that have people reaching for your service whenever they have an itch to scratch, and you win. Or, partner with enough companies that you end up being the default option for your service in their ecosystems, and you win.

The importance of being the default voice assistant

When you’re the default service provider in a given market, you take all the spoils. It takes too much effort for people to switch, so as long as you don’t do anything stupid, you’ll have users for life.

Being the default search provider made Google the starting point, the entry point, the gatekeeper, to the internet. The rest is history.

Now that people are becoming more comfortable talking to their devices, they’re realising how much easier using their voice is. It’s only a matter of time before we instinctively and habitually use our voice to do most of the things we need to do, from researching and buying products, finding information, being entertained, managing our life and work, finding a new job, house… Everything. And it’ll happen sooner than you think.

Amazon knows this, as does Google, hence the battle we’re seeing now.

The untrained eye might think that this is all about smart speaker market share, but the reality is that these two companies are fighting to become the new default access point to the internet and the control centre of your home, your work, your life; for life.

BUT, before you get any usage whatsoever, you need to create two things: availability and access.

And this is what the last 4 years have been all about for the Alexa Everywhere strategy.

The single most important stage in the adoption of new technology and in cementing your position as the no. 1 voice assistant in the world is to enable access to it.

That means you need to make it available in enough places so that Alexa is able to be called upon, no matter where you are in the world, what environment you’re in, what your budget is and what device you have with you, Alexa needs be be there and ready to talk.

Amazon has dominated smart speaker market share, China excluded, since day 1, but it knows that the home is only one environment it needs to own. What happens when you’re not home?

This is why Amazon has invested so heavily in making Alexa available in cars with both direct integration through Alexa Auto SDK and the Echo Auto. It’s also the reason why we’re seeing all of those other wearable devices like headphones and hardware integrations made possible by the Alexa Voice Service (AVS).

Amazon has always had one weakness when it comes to Alexa

So where is that weakness?

The one device that most people on the planet already have 24/7 access to.

Microsoft found that Siri and Google Assistant are the two most used voice assistants, despite Amazon’s dominance in the smart speaker market.

Why? Mobile. They both own the two most common mobile operating systems in the world.

And why is owning the operating system important?

If you own the operating system, you control access to the native voice assistant of that OS.

You could class Alexa an an operating system in its own right. On Alexa-first devices, like Echos, that’s exactly what it is. Amazon controls the access, not just to Alexa, but to all of the other thousands of third party apps built on the OS.

On mobile, that privilege is granted to Google and Apple. They both control the access point in their respective OS with native wake word detection.

The power of owning wake-word detection

That’s why ‘Hey Siri’ and ‘Hey Google’ are the two most important phrases for Apple and Google right now, even if Apple doesn’t know it.

That’s why #HeySiri and #HeyGoogle are the two most important phrases for #Apple and #Google right now, even if Apple doesn’t know it. Click To Tweet

We have our phones on us most of the time, and if that’s all you have access to, and you say “Alexa”, Alexa isn’t going to do diddly squat because it can’t hear you. Despite being available on mobile via the Alexa app, Alexa is difficult to access on mobile.

You can create as many new devices as you can think of, but you’ll have a hard time displacing the mobile phone any time soon. And so, without a mobile phone, and direct access to wake-word detection, Amazon is constantly at the mercy of Google and Apple in the one space where voice arguably has the most potential. 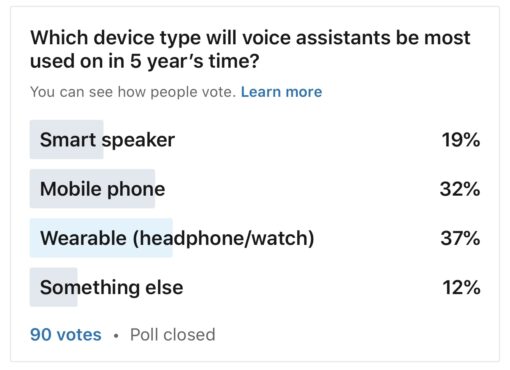 We recently ran a poll on LinkedIn asking ‘Which device type will voice assistants be used most on in 5 year’s time?’ Most people voted for Wearables, closely followed by Mobile.

Without a #smartphone, and wake-word detection, #Amazon is constantly at the mercy of #Google and #Apple in the one space where #voice arguably has the most potential Click To Tweet

So how does Amazon compete on mobile?

How do you get around not owning the most ubiquitous device the world has ever seen?

Well, you integrate with it. Deeply.

And this is Amazon’s latest advancement in its Alexa strategy: to integrate as deeply as possible with the existing mobile operating systems.

There are a number of ways Amazon is intergrating Alexa deeper into the mobile ecosystems of iOS and Android, including:

All of these features show that Amazon is attempting to break into the current mobile ecosystems of Apple and Android and have trying to enable easier access to Alexa in a core place where it’s already available.

Alexa will always struggle to overcome the challenges of being a third party app, rather than the operating system’s native assistant, but for now, it’s doing all it can to slide its way into as many mobile spaces as possible.

The difference between chatbot and voice search refinements